As always, a download link can be found here

I'm sure there isn't a cyclist in the country who hasn't heard of Bow Roundabout. There have been 3 deaths since Cycle Superhighway 2 was introduced here. It took two of those deaths to introduce an "innovative" early start system, which is about as innovative as the double ASL I made for April Fools. Personally I think this should be renamed to delayed start, since a red light is always guaranteed for cyclists.

If the lack of cycling facilities on a flagship route isn't bad enough, there is no safe way for pedestrians this busy junction whatsoever. This junction is probably worse for pedestrians, but they stay away because this isn't a flagship walking route, it's a flagship cycling route.

Bow roundabout is a horrific car dominated landscape in the middle of a residential area, and involved knocking down whole houses and streets to build it. While this is an important junction and motor traffic capacity should be considered here, it should by no means be at the expense of pedestrian and cyclist safety.

There are two options at Bow Roundabout, sending cyclists over the flyover, or a separate light phase at the roundabout. TFL did a consultation when they introduced the delayed start system, with the other option being 4 toucan crossings at the base of the flyover. Diamond Geezer wrote about this concept at the time 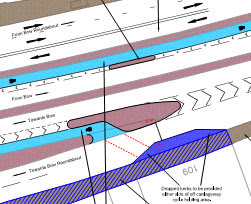 Not great, but better than what exists

However, I went for a segregated light phase on the roundabout. I feel this is better, because:
I've made the Roundabout more rectangular rather than round, which means that the wasted space in the middle of the roundabout can be moved out to the sides, where it can be used for a cycle track and more pedestrian space.

An additional light phase is needed to accommodate the cycle and pedestrian crossings, however traffic could still continue around the roundabout during this phase.

Bow Roundabout is a deathtrap for cyclists and pedestrians, yet this continues to be ignored by Transport for London to keep the traffic moving. Changing this junction should be a priority, yet all that has been done is some superficial changes to make it look like something is being done. This isn't good enough.
Posted by maidstoneonbike at 17:20