The West End Project is a £26 million investment to improve the area around the Tottenham Court Road area. There is a desperate need to improve here, as fast traffic is encouraged, making it a terrible place to walk or cycle. While walkers and bus passengers will see a vast improvement, as the project stands, cyclists get nothing.

Yes, we get some small plastic blobs on Gower Street, but these fail to work effectively on Royal College Street, a lightly used road. Suggesting these on a main road is absurd.

The plans for Tottenham Court Road are essentially to create an Oxford Street v2.0. Cycles will share with 176 buses per hour during peak times, and then with general traffic in the evenings and on Sundays.

I've assumed that roads outside the West End Project will not change, and I've not really changed roads other than Tottenham Court Road. Therefore side roads may not be perfect. 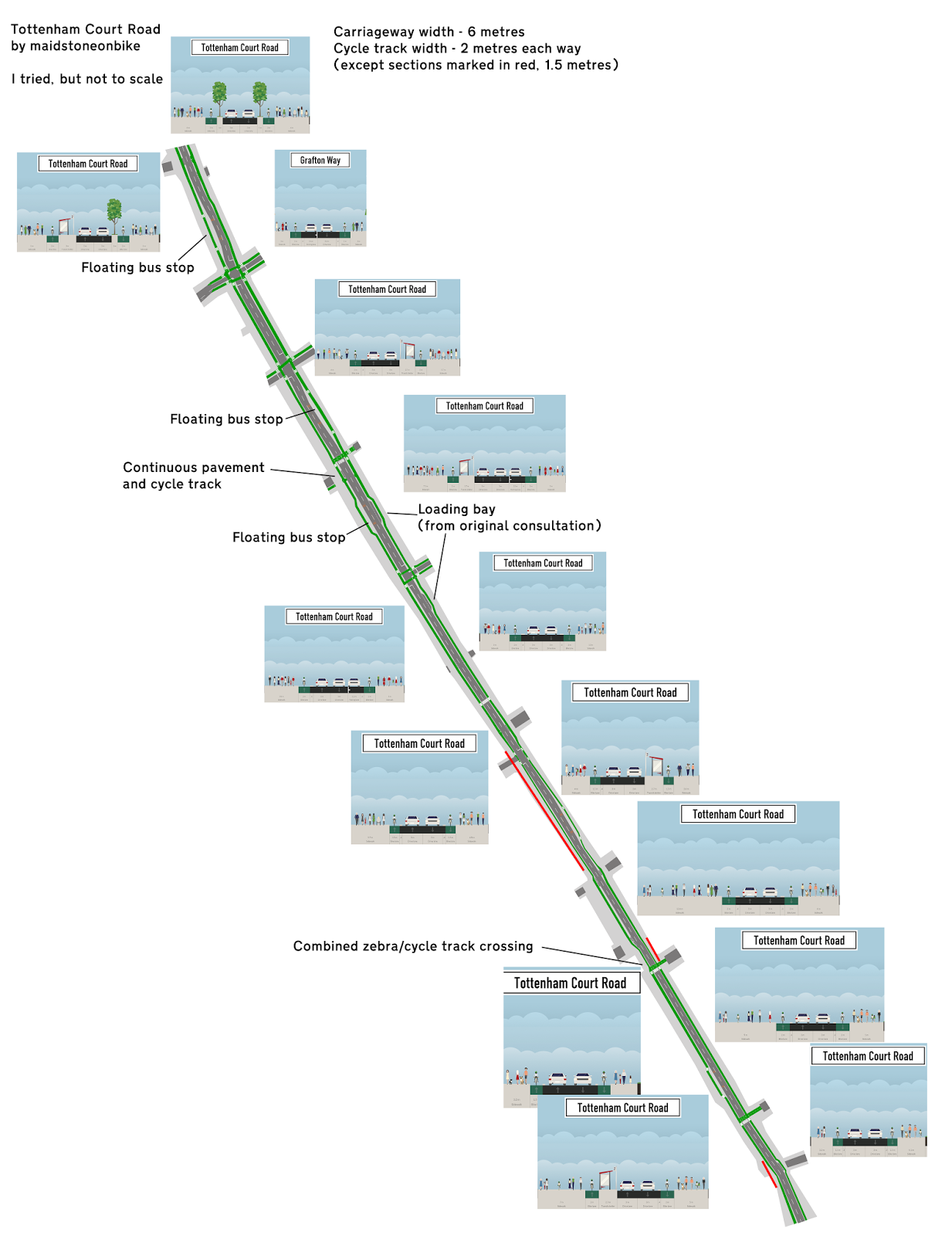 The objection for proper cycle tracks was lack of space at a few points. There was objections for floating bus stops, as the carriageway isn't wide enough. These objections even came from a cycling campaign group, whom I won't name, who really should be campaigning for the best, and not making terrible compromises.

Firstly, a few narrow points should not compromise the whole design. These sections are short compared to the overall length of Tottenham Court Road, so it should be perfectly acceptable to compromise. Instead of a 2 meter wide track, a 1.5 meter one would have to be installed. This is substandard, but acceptable for short sections if it allows for excellent facilities elsewhere.

Floating bus stops also fit into Tottenham Court Road. Yes, some pavement space would have to be taken away. However, bus stops are not usable space for pedestrians anyway. Bus shelters create pinch points on pavements and lead to clutter. If these are moved out to an island, this is better for pedestrians, even if a small amount of pavement space is lost.

To conclude, cyclists are being ignored in the West End Project. Money isn't an object here, so if space for cycling cannot be created here, hope for it elsewhere greatly reduces.

On Monday 30th June, I'm going to an event organised by Camden Cycling Campaign regarding this project. If you are interested in the West End Project, I recommend you come too. And if you see me, say hi :)