Get off the hype train

Last week I went to the Netherlands, on one of David Hembrow's study tours. You can look at photos as long as you like, but to fully understand Dutch infrastructure I believe that you have to see it first hand.

I will do a proper blog post on the brilliant infrastructure I saw, however this post is more focused on the not so great infrastructure that came from London while I was away.

Feel the space, ignore the design

Don't get me wrong, the two new superhighway routes are a huge step forward. The amount of space being allocated to cycling is great and the chance to have safe cycling routes along Embankment and Blackfriars junction is a great proposition.

However, they don't deserve the hype that they have been given. The design of these routes is clearly lacking, and in many places, it's appalling. I fear with the amount of hype these routes are being given, we cannot progress. If TfL get the message that these are good enough, this is all we will ever get.

Take "early start" as an example. For years, cycle campaigners have been telling TfL that the addition of these to Bow Roundabout is not enough. With 60% of cyclists refusing to use the roundabout and continuing to use the flyover, it is pretty clear that it is an awful design. Yet I am still told that I have to wholeheartedly support the new superhighway, despite Early Start being used 3 times just on Parliament Square

I have actually already done plans for two parts of the superhighway, at Parliament Square and the end of CS7 at Upper Thames Street. However, these were made before I knew about the wonderful Simultaneous Green Junctions that exist in the Netherlands.

Below is a video of Simultaneous Green working at a 10 lane junction:

The first design I have done is on the East-West Superhighway, at Blackfriars. This junction has excessive traffic lights, with all movements through the junction but one, require cyclists to use two sets of traffic lights. By replacing these with a simultaneous green junction, at worst cyclists will only get one set of traffic lights here, and at best, zero. 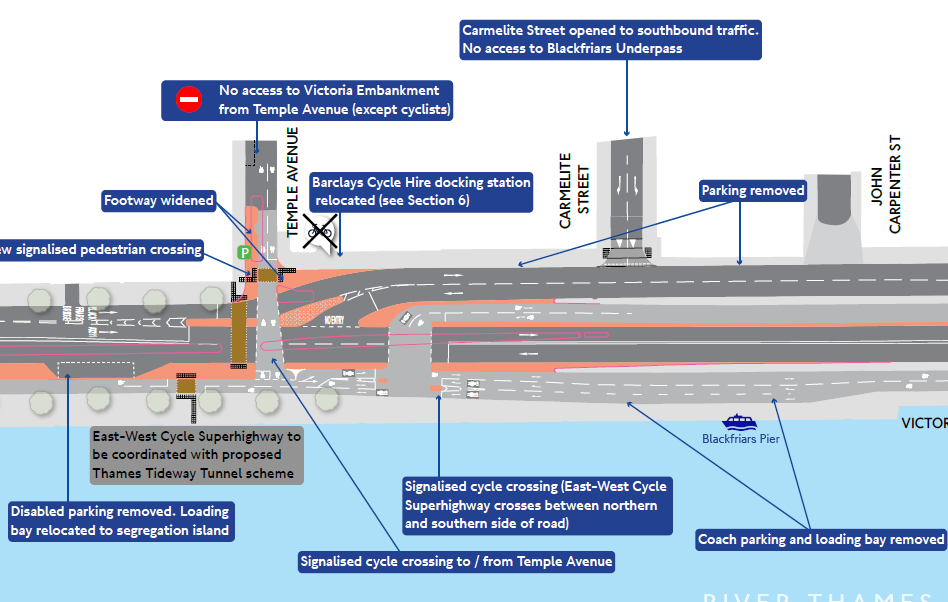 The second design is the junction of Embankment with Savoy Place and Savoy Street. I've replaced the two stage ASL with a simultaneous green junction, which is quicker for cycles. I've also made Savoy Place two way for cycles. 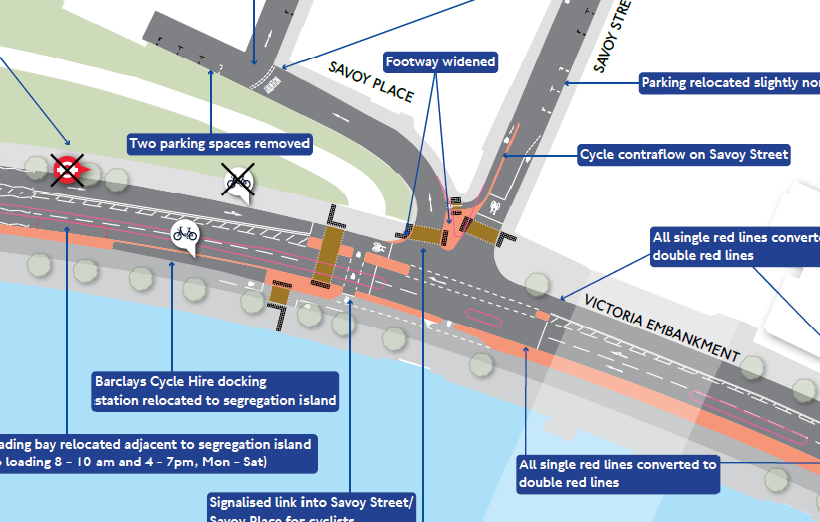 PDF files for the Blackfriars junction and Savoy Junction.

Sitting on the fence

So should you support the East-West Superhighway? Well, partially. The amount of space given to cycling here is great, and on some individual sections, I'll happily support completely. But there is just too much shitty junction design to give wholehearted support, and some sections where I have said no completely (Parliament Square and north of Hyde Park). So since TfL gives the option, I suggest people support partially.

Too much hype tells TfL the job is done. It isn't, so don't give that impression.
Posted by maidstoneonbike at 18:58