UPDATE - I've created a PDF of my amendments, which looks much prettier, and can be zoomed in without a loss of quality. This can be found by clicking here.

TFL has released a consultation on "improving" Elephant and Castle roundabout. The full details can be found here here, but I have included the plan of the junction below


Who is this for?

Cycling wise, this junction has been designed for nobody.

Alright, you do better then!

Before I show you the designs I've come up with, some disclaimers:
My design has used the base TFL plan for the junction, and then added more cycle tracks, remove ASLs and relocated certain crossings and bus stops. Interestingly though, this design doesn't remove any motor traffic lanes. I have also not added any new crossings, only added cycle crossings to existing pedestrian crossings, so this design would in theory be possible without disrupting motor traffic (whether that is a bad thing or not is up to you).

The easiest place to start was St. Georges Road. The cycle track in the original gives way at what looks like a side road. On closer inspection on streetview, this is actually a driveway.

Immediately the original plans have lost credibility. This is a brand new cycle track being built and we are still having to put up with this crap.

The next section was pretty simple to improve as well. I've added a bi-directional cycle track which connects to the original TFL added crossings. However, both of these are now bi-directional, and my track connects to my other new tracks on New Kent Road and Newington Butts (heading south). Cyclists heading south no longer a set of traffic lights, but give way to cyclists heading East-West.

In the original consultation, this area is a bit of a mess. Sure, some cycle tracks have been provided, but to access them you may need to cycle on a strip of paint down the middle of four lanes to get there.

I've provided full cycle tracks around this area, and added a cycle track crossing to a pedestrian crossing. I've eradicated all evidence of the ASLs, since they are not needed with cycle tracks. I've had to shorten the bus lane but now left turning buses no longer have to share space or time with cyclists going straight ahead. Again, all cycle crossings have been attached to existing pedestrian crossings, so there should be no extra delays for motorists. 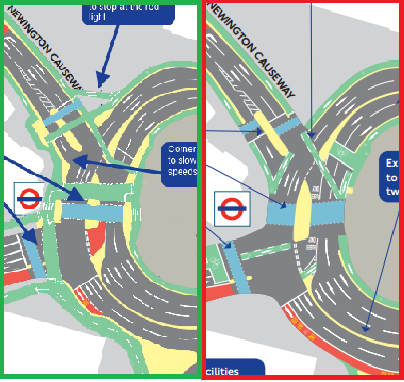 Elephant and Castle is currently a horrible junction for motorists, cyclists and pedestrians, and something does need to change. TFLs plans however do not cater for any sort of cyclist, even someone who is willing to trade safety for directness (which is a bad policy anyway). While my designs are nowhere near perfect, something has to change at TFL. Their whole design either shows huge incompetence, or simply that they want to do something to shut the cycle campaigners up.

That will never happen.