Kings Cross can be cycle friendly

Download link in PDF file format can be found here.

Following how well received my amended version of the Elephant and Castle consultation was, I decided that I should give another TFL consultation the cycle infrastructure it deserves. Kings Cross seemed an obvious choice, because TFL had said that cycle tracks had been ruled out due to space constraints. The original consultation is below: 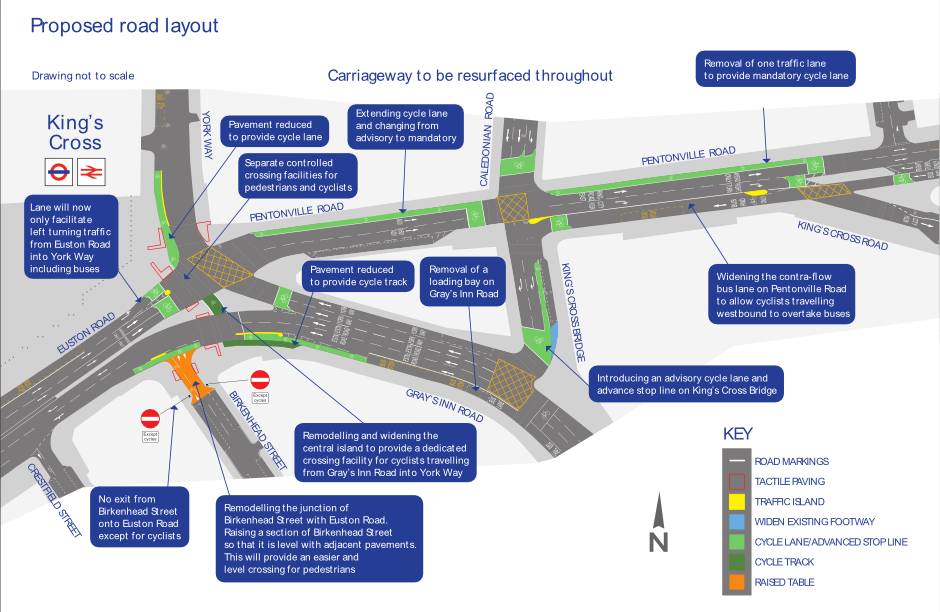 There are some improvements to the current situation. For example, a widened cycle lane, the addition of ASLs in some places, and a tiny bit of segregation. But while these are improvements, these will only improve conditions for vehicular cyclists, and will not attract new cyclists. This scheme is a step in the right direction, but only just, and comes at a time when London is going to need to take huge leaps forward if we want to become a true cycling city.

Therefore in my version, I wanted to be able to add cycle tracks where possible. And this was possible in most places. 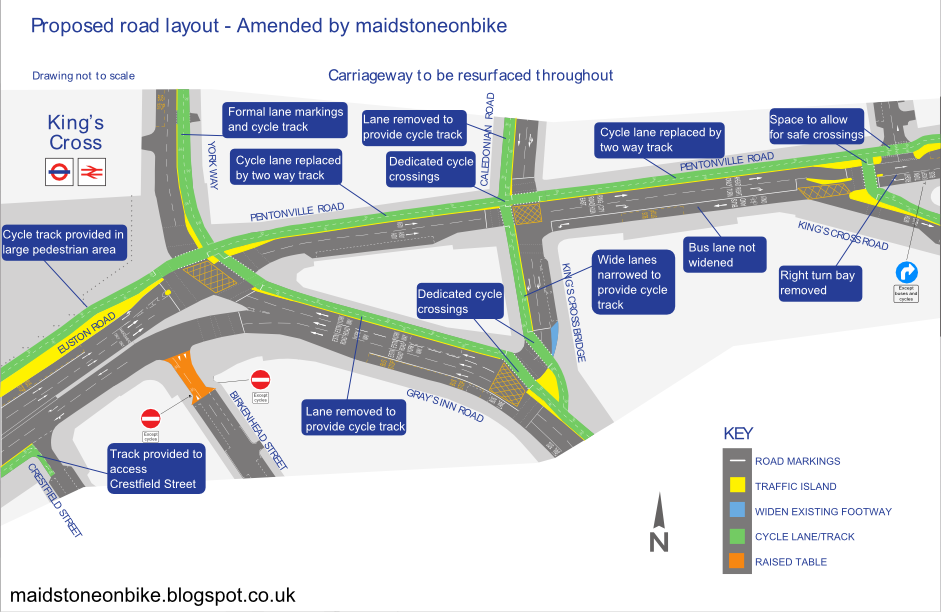 TFL had rejected the idea of putting a segregated track down Pentonville Road due to losing a vehicle lane being unacceptable. This made me really want to be able to add segregation along here without losing a vehicle lane, to prove to TFL that there is space. The space for the cycle track was created from the existing cycle lane (widened in the TFL original consultation), the hatched out space between the loading bays and the road, and a small amount of existing pavement. At first I was hesitant about removing any pavement, however I think the cycle track increases the amount of usable pavement, since walking next to a cycle track is pleasant, whereas walking directly next to a main road is not. 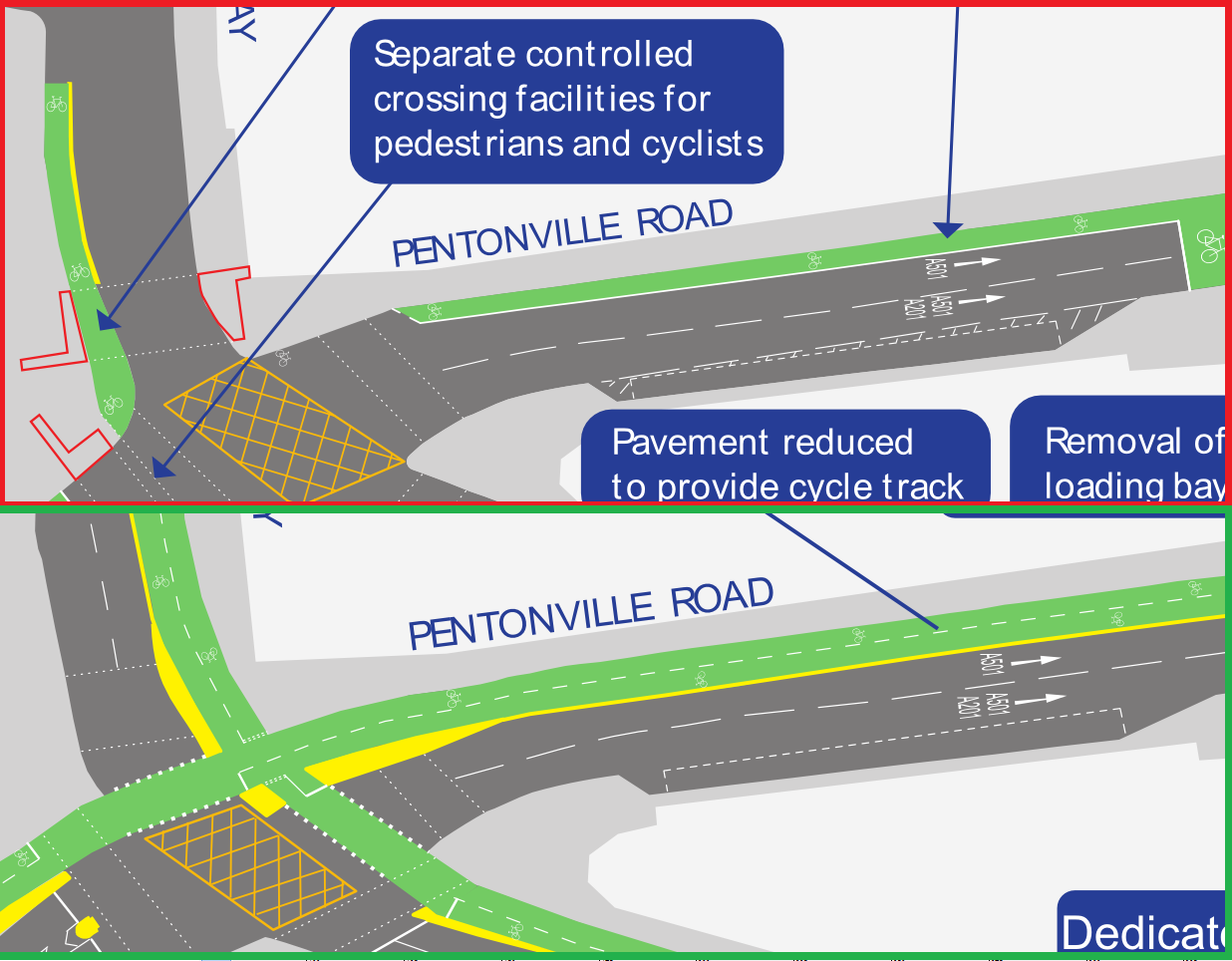 Junctions are the most vital part of any cycle infrastructure. A single bad junction could put someone off cycling for their whole journey, so safe crossings are vital. The most straight forward crossing is the one at the top of the picture below. Two cycle specific crossings are provided, which allow cyclists to cross parallel to the adjacent traffic lanes. Personally I don't like how the tracks cross at the top left corner, as it doesn't allow much space for cyclists to wait for the crossings. However, in the limited space, I felt this is the best I could do. 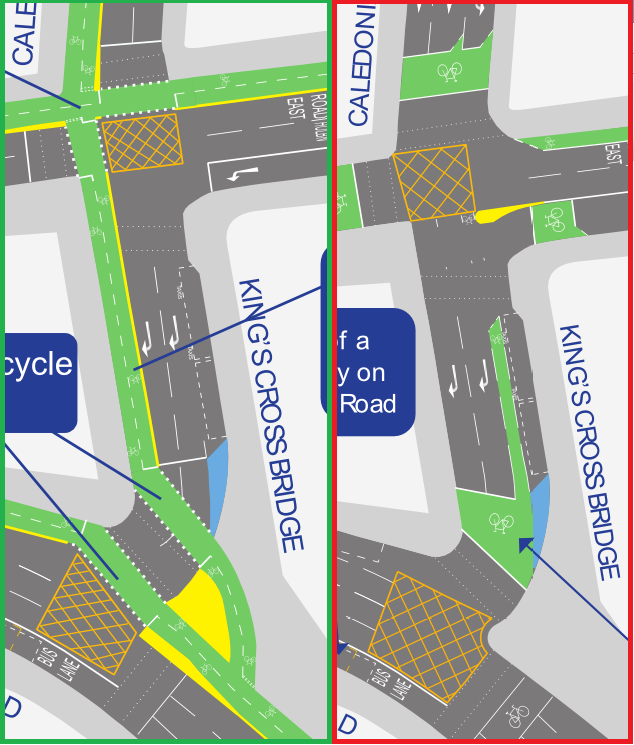 I went for two separate crossings at the Southern end of Kings Cross Bridge for two reasons. One, providing one cycle crossing would require joining up the two tracks round the corner. This would inconvenience pedestrians and potentially make the corner too tight for vehicles. Secondly, few cyclists will need to go round this corner, since the layout of the junction means that this turn would not be made unless cyclists were accessing a place on Grays Inn Road. Therefore I chose the dual crossing design, as odd as it looks.

It was relatively easy to provide safe crossings here. A traffic lane can be removed after the junction with Kings Cross Road because there is no creation of a bottleneck. Therefore no extra queues should be created. The right turn bay bay has been removed also, since not much traffic needs to make the right turn. The cycle track along Pentonville road passes the side road with priority, and also with space for traffic to turn before giving way to cyclists, increasing cyclist visibility. I have also created a waiting area for cyclists to cross to reach the track on Kings Cross road, via a dedicated crossing.

Again, TFL have produced small improvements for existing cyclists, but their design will attract no new cyclists. Only complete segregation on main roads will attract new cyclists, not bits and pieces of unconnected cycle lanes and Advance Stop Lines. TFL is still learning, and I still think in terms of UK cycling, they are relatively progressive. Expect more amended consultation diagrams from me in the future, and I look forward to advancing my skills forward.

TFL have sent out an e-mail to those who responded to the consultation saying this:

Thank you for taking the time and providing us with your views on our proposals to improve safety in King’s Cross for cyclists. After carefully considering all of the feedback received, we have made the decision to proceed with the proposals.  Please view our consultation and engagement portal to view a copy of our engagement report. Following comments received about the provision of a segregated cycle lane on York Way, we have revised our plans.  We are now proposing to introduce a semi-segregated cycle lane which will allow cyclists to move onto the main carriageway and overtake stationary buses and taxis if necessary. Construction of the scheme is expected to start in October 2014 and last for approximately six months. Please feel free to email the TfL Customer Services Team via the web form on our website if you wish to discuss plans or our decision in further detail.
Yours sincerely Claire AlleguenConsultation SpecialistTransport for London


So we are getting some shit, but with some semi segregation so we can overtake buses and taxis who enter it. Wonderful.
Posted by maidstoneonbike at 19:18